This was revealed by Director General of the National Automotive Design and Development Council (NADDC), Mr. Jelani Aliyu during a recent tour of the manufacturing complex of the IVM. 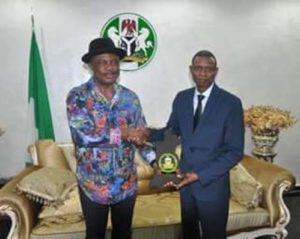 The NADDC has also been able to secure the the approval of the Anambra State government during a courtesy visit to the Executive Governor of Anambra State, Chief Willie Maduabuchukwu Obiano, who expressed his government’s commitment and full support, and allocation of land for the project.

The IVM tour would be Jelani’s first visit to any Nigerian automotive manufacturer as he unfolds his agenda to reposition a sector he says all the key to Nigeria’s ability to industrialize and connect her diverse people. “The importance of the automotive sector in any nation, whether developed or developing, cannot be underestimated, as it is both the direct provider of the logistics of life and the enabler of exponential multiplier effects,” Jelani had stated while officially assuming office some few months back.

The NADDC team which included the Director, Policy and Planning, Alhaji Luqman Mamudu, and management staff were given a tour of the IVM facility by Chairman of IVM, Chief Innocent Chukwuma. The NADDC team inspected the different models of SUVs, cars and buses that IVM manufactures as they went through the various sections of the plant.

“I am very happy and excited to be at Innoson and to see the wonderful work being done. This is something that all Nigerians should be proud of, to see an indigenous automobile manufacturer producing cars right in Nnewi, making a significant contribution to the local and national economies, and to the development of the nation’s automotive sector,” said an impressed Jenali noting that IVM is the first indigenous company in Nigeria to produce vehicles and is also set to export internationally.

Innoson is set to export 400 of its vehicles to Mali to usher in an export era for Nigeria’s automotive sector as crude oil dips and Africa’s largest economy seeks to expand its economy in manufacturing and non-oil sectors.

According to Jenali, all the necessary infrastructure will be provided at the Nnewi Automotive Industrial Park to allow manufacturing stakeholders to set up operations. “The Park will provide thousands of direct and multiplier effect jobs, and enable the transfer of relevant technical skills and technology. It will be a world class hub of advanced technology which will supply world standard components to feed both the automotive service and repair market, and local assembly operations. The park will also be linked to global technology partners, beginning to prepare its relevant invested stakeholders with capabilities that would allow them to support the three upcoming global automotive mega-trends of : Electric Vehicles; Vehicle Autonomy and; Ride Sharing.”

Jelani Aliyu, designer of the Chevrolet (Chevy) Volt, and a genius of global standing, was appointed by President Mohammed Buhari this year to lead the NADDC to newer heights. The NADDC was created by an Act of Parliament in 2014 to promote competitiveness and enhanced productivity in the automotive industry. The Council is also tasked with the provision and development of industrial infrastructure, skills development, development and adoption of standards, investment promotion and market development for the automotive sector.